Age 31, Rory Mcilroy was born on May 4th, 1989 in the UK. The UK-born pro golfer is currently a member of the European and PGA tours. His accomplishments on the course set him apart. He was the winner of the U.S open in 2011 and the PGA Championship in 2012. In 2014, he claimed the Open Championship.

The former Official World Golf Ranking position one holder has a loaded bag. The Rory Mcilroy WITB is the reason for his success. From the TaylorMade Spider X to the regular driver and clubs, the Rory Mcilroy bag has been evolving for the longest time. He has used the Sim Driver, the Taylormade Spider X, and the Tensei CK Pro White among other clubs, shafts, and putters.

Keep on reading to get a full glimpse of the Rory Mcilroy WITB. We will be looking at his bag in more detail, ranging from the 52-56 degrees wedges with Ventus Black 6 X shafts  wedges to his putters and more.

Rory Mcilroy signed a major deal with TaylorMade in 2017 which saw the golfer use their woods for about three years. With a full bag of TaylorMade items, he enjoyed a wide selection of wedges, shafts, and clubs from one of the best brands. The bag is loaded with 14 clubs, a shaft variety, and the best golf balls on the market.

With changing times, Rory Mcilroy WITB has also been changing. Whilst still a loyal TaylorMade consumer, his performance is also related to his improvement with his woods. In 2020, Rory used the 5 wood Taylormade SIM2, but he has since upgraded.

In 2021, Rory Mcilroy WITB includes upgraded SIM2s for 2021. Among the notable items in the bag are the wood Taylormade Sim2 and a selection of SIM 2 fairway woods.

Below are some of the related products in Rory Mcilroy PGA Tour bag:

All the above products have been instrumental in Rory Mcilroy’s success. The Mitsubishi Tensei CK Pro White is by far Rory’s favourite shaft in his clubs.

What Clubs Do Pro Golfers Really Use?

The club used by pro golfers is important in their success. Like Dustin Johnson and Tiger Woods, Rory also uses some of the leading clubs and golf balls. Using the best driver, golf ball and other accessories has become key to success.

Below are some of the clubs and balls used by the best golfers in the world:

The driver sets the pace for every golf player. Getting the first tee shot right is very crucial. In this area, TaylorMade drivers are a popular option. The TaylorMade SIM driver is used by top golfers including Tiger Woods and Rory Mcilroy.

Pro golfers look for accuracy and range in their choice of fairway woods. Much like the case with drivers, most players prefer the TaylorMade SIM TI woods. The 15° matched with the Mitsubishi D+70 TX shaft has stood out.

For shaft irons, most pro players tend to prefer the TaylorMade P7TW matched with the TX irons. The TX irons work well with Mitsubishi shafts and can be relied upon under rigorous circumstances.

The main ingredient to your score it putting and this is where the golf ball comes in to play. Even with the best wedges Taylormade, the right ball is important. Most top-level players turn to the TaylorMade TP5 and the TaylorMade TP5X balls. These balls work well with all 5 wood and 3 wood Taylormade options.

Of all the accessories used by pro golfers, here are the top four and the most selected options:

A Taylormade TP5 ball appears to be gaining interest from the best players globally.

What Shaft Does Rory Have in His Driver?

The shaft used is just as important as the driver. Like most players, Rory uses different shafts for different PGA Tour events. During the Abu Dhabi HSBC Championship, he used Mitsubishi Tensei CK Pro TX White 80 shafts. Besides the driver shaft, he has also used Project X Rifle 6.5 shafts on his wedges.

Below are some of the best shafts used by pro golfers:

The main shaft that has stood out is the Project X New HZRDUS Yellow. GolfWRX on several occasions has spotted top players using it and can be a good addition to the bag.

The TaylorMade iron might be one of the best irons and has the best shaft. The Mitsubishi Tensei CK Pro White 80 TX with the driver.

There are diverse ideas for the right shaft for a pitching wedge and a favourite among top players is the Fujikura Choose Flex. This shaft has been part of the game for along time.

Those playing golf tend to think that putter shafts are related to the feel and experience. To play a solid game, a medium-weight putter shaft is generally needed.

What Bounce Does Rory Have on His Wedges?

The bounce on wedges is determined by the accuracy and degree. Rory Mcilroy’s wedges TaylorMade mostly use a standard bounce. Rory Mcilroy has mentioned that his WITB includes normal bounce wedges and a Mitsubishi 6.5 shafts.

Why Does Rory Mcilroy Have Project X in the Bag?

Whilst Rory Mcilroy’s bag is loaded with Mitsubishi shafts and TaylorMade clubs, he also has Project X options. Project X is not related to any contracts but rather the performance. He admits that his tour bag would not be complete without Project X. 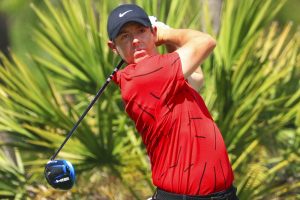